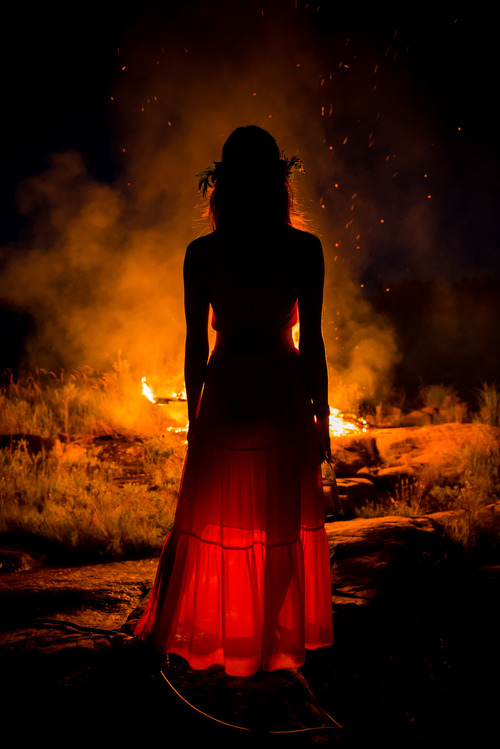 In the late evening light, when shadows lengthened and the realization of what they’d just done began to sink in, the strongest among them laid the logs for the pyre.
By the time they were done, a deep yellow moon filled the sky and the stars played hide and seek among the gold-limned night clouds.
“You’ll light the fire, Elari.”
“Angelus, I can’t.” Her eyes glimmered with unshed tears.
“They’re dead; they’re not coming back.”
“We don’t know that!” She turned her back on him, wiping her eyes on the sleeve of her dress.
Angelus almost slapped her, but that had been the Old Way; they’d have been there to stop him from harming, and killing.
Without them, he would have to be better. He wanted to be better.
Indeed, he needed to be, to lead them into this new age they’d so violently embraced.
Elari turned back to him, brave and sadly defiant, like a wilting flower refusing to accept the inevitability that there’d be no rain.
“They were our parents, Angelus. They protected us. Provided for us. Loved us. And this—“ her sweeping arm took in the high pile, “is how we repay them?”
Angelus was not one easily surprised, but Elari’s standing up to him now, speaking as she did, was a new thing. He had the wry thought that things were already improving for her, and she didn’t know it yet.
It was good to see her do this; he would need someone to rule at his side. She was beautiful, and smart. This new fire kindled in her only added to his attraction; he admitted, to his delight, that he was secretly pleased, but this was no time to indulge it.
“They threw your little brother on the fire, Elari. You wept in my arms for hours. Did you forget?”
His quiet words checked her rising fear; she’d opened her mouth to protest, and found no argument.
***************
Her emotions were raw, her eyes sore from weeping, her voice hoarse from pleading, her knees hurt from kneeling, but her father did not relent.
“The gods call, and we must answer. It is the Old Way, and we honor the gods and our ancestors.”
“A god that calls for the new lives he created to be consumed in such a horrid way? You and mother lay together, and made him. He is only just growing, and he deserves –“
Her father wheeled on her, and just for an instant, she saw the inner struggle; he buried it with an ease that shocked her, and straightened to his full height, her little brother fidgeting in the tightening embrace.
“You are out of place, child. Don’t presume to speak to me in such a manner. I will hand you over to the Elders Council, and gladly, if you say another word.”
The thought came to her, oh-so-tempting, that she would bare her ass to the Council.            The old fools would be so shocked and get so randy they wouldn’t know what to do;  she’d seen their surreptitious glances in her direction.
She stood up, and looked at her father; her words had almost cracked the anvil of his heart, but she’d entreated and abased herself long enough. She simply couldn’t go on.
Coming toward him, she pried her baby brother from his arms, soothed him, andd took him into the room they shared.
“I’ll give him back to you for killing,” she said, “when the time comes.”
When the time came they hunted her with dogs, surrounded her with weapons, anthe squalling infant from her arms.
She stayed in the forest that night, not caring what happened to her.
The smell of smoke was faint in the air, the evil god they served making sure she got a whiff of that little body writhing and screaming in the flames.
She hated her father with all her heart, but there was that moment he almost broke.
Almost.
*****************
She turned away again, looking at the dark tree line. “No, Angelus. I remember everything.”
“Then you’ll light the fire?” He came to her, put his strong hands on her shoulders; in spite of herself, she leaned against him.
The word was a weight in her throat, and her heart warred with her mind.
Angelus was patient; she had to decide for herself, and then he would know what to do with her.
She nodded.
“Say it, Elari.” He flexed his hands on her shoulders, lending her strength, and pushing her over the edge to the New Way.
She drew a deep, shuddery breath, trembling under his hands.
“Yes.”

Rest in the Nightshade

This blog is dedicated to the darker side of my imagination. May you find it as entertaining as I do.

The Echoes of Ruins

Too Long a Silence