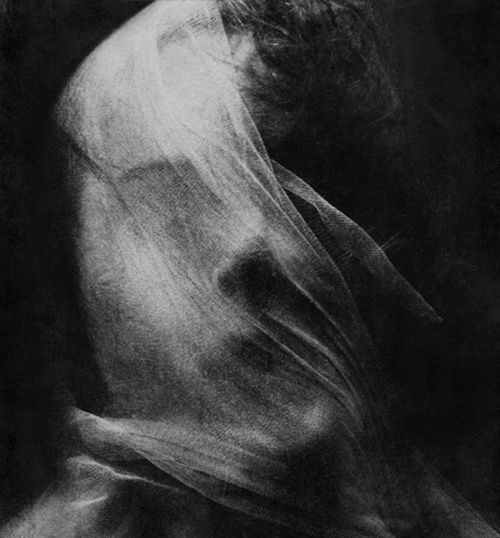 Years later, standing there alone in the center of the sizzling, stinking, fire strewn rubble, I was left without a sense of peace or resolution following the enemy’s defeat.

As the sun set in the very shades of the blood we spilled, those who gathered round to gawk at the remains of their invaders likely felt a sense of ‘closure,’ but the only thing that closed for me that day were the gates of any celestial paradise to my immortal, trembling, wailing soul, and I left them to bury their dead, and loot what they desired, reminded once more of the calling that followed me, and the curse that followed the call.

I was in their world, even then, and while not quite understanding what was wrong, I knew that something wasn’t right.

The spirits were all around the onlookers staring into my cradle. A swirling mass of black shapes and shadows, they too turned their gazes on me, peering as they assessed the threat.

I stopped pulling at my face and returned their silent scrutiny, looking past the smiling, cooing, babbling faces that were a hair’s breadth away from having their souls snatched from the land of the living the way a cutpurse steals the gold of the unsuspecting.

The onlookers were now cheering, surrounding my body, kissing my cheek soiled by ashes and blood, pounding my back, and offering hands to shake that I ignored.

I was a foreigner here; I had no tribal marks, nor spoke their language, but their grateful smiles convinced me that I’d helped win the long, protracted war against the invading hordes that seemed to continually plague them. As the cheering continued, despite my reluctance, in my own relief I began to return their smiles, and in a rush of pride foolishly, foolishly roared my hollow victory to the equally hollow sky, or so I thought.

But the gods that dwelled in hallowed halls had just begun to make the path crooked as they played with my life.

The spirits around my family and their friends all turned their attention to a dark haired, dark eyed woman who took my infant fists in her hand, and leaned over to get my attention.

Everything went still, and with three of her long fingernails and a practiced motion she lifted the caul from my face, letting it dangle for a few seconds while she cleaned my face with the damp, warm cloth in her other hand.

My face was cold, and I suppose blue, because she set the cloth aside and rubbed my cheeks with her soft palms as she turned to reassure my mother I would live.

When she took the caul, it was not a tearing off, but more like an extraction of something inside me, like lovers releasing a long, hard hug.

She put it somewhere on her person, and the spirits began to disappear from my sight, as grim and deathly silent as they’d manifested.

As the sense of relief at their liberation swelled, I found myself lifted and carried on shoulders that bobbed and dipped not unlike the ocean. Whether it was from drunkenness or weakness. I couldn’t tell, and it didn’t matter, but I bunched some fabric on shoulders in my fists and held on, not knowing where they were taking me.

Inevitably, the toll of the fight took my consciousness as its prize, and the last thing I remember was a pair of large hands peeling me off the revelers’ shoulders, and lifting my prone body into the air.

I woke up in my own bed.

Covered in bruises and scars, I didn’t understand what happened at first, handed back and forth between dreams and reality as I was, and not being able to tell the difference.

What was it about that war that I needed to be a part of it? What was inside of me that it needed in order to end?

How much did I really want to know the answer, to remember what I did, what my birth caul had to do with it, and what was the price of that knowledge?

At the core of me now was an emptiness, cold and black, devoid of anything remotely like desire to repent or apologize for whatever it had been.

Let the blood and madness flow, then.

Rest in the Nightshade

This blog is dedicated to the darker side of my imagination. May you find it as entertaining as I do.

Do You Not Hear the Bells?

Bells in the Mist

The Bells of Spring

Restore Me to You

The I’s Have It